Particularly in sea areas with increased traffic density and in narrow fairways, a high degree of situational awareness is required by the nautical personnel on a ship to avoid undesirable incidents. To increase safety at sea, district and harbour pilots are involved in navigational decisions to support the bridge team. The pilotage personnel use a portable pilot unit (PPU) on the ship's bridge. This accesses various sources in order to receive nautical charts as well as important information about the ship, the port of destination and other ships via radio communication before boarding the ship and to have it displayed during the pilotage.

During the KEI.POP project, the South Korean and German project participants worked together to develop a new innovative pilot information system. Interviews with PPU users had previously shown that today's systems often provide a delayed picture of the current situation on the waterways due to a lack of broadband network coverage. In critical situations, for example in poor visibility, navigation is carried out according to good seamanship and on the basis of classic sensor systems such as ship radar and AIS (Automatic Identification System) as well as the knowledge of the pilotage personnel. The data from the AIS would only provide a delayed and inaccurate or sometimes even false picture. This can affect, for example, the ship's dimensions and draught. In addition, ship radars are limited in their use by visual obscurations due to other road users, which does not apply to land-based radar images in traffic centres. These deficits were counteracted by the KEI.POP project.

The aim of the international project was to increase maritime safety by developing a new support system for pilots, through which current, land-based information can be brought to a ship without data loss and delay, even at low data rates. The Maritime Connectivity Platform (MCP), for which internet technologies are being standardised specifically for maritime applications, was used to achieve this goal. The security of ship-to-shore communication could be significantly increased compared to established technologies. The MCP was made available to the German and Korean PPUs as part of the project. This enables the pilotage and nautical personnel on board to access current situation pictures, which contain in particular the current traffic situation. The much more accurate shore-based radar image is made available via a web service, which the PPU accesses and cleverly places the radar image as an overlay on the electronic nautical chart. Furthermore, prevailing hydrographic and meteorological conditions (for example, current data, water levels, wind speed and direction, visibility) or information about the connecting logistics chain will also be included in the future.

OFFIS integrated the project results into the maritime test field eMIR (e-Maritime Integrated Reference Platform) in order to test them using simulative methods, also for particularly critical situations. In its role as project coordinator, OFFIS worked closely with the South Korean research institute "Korea Research Institute of Ships & Ocean Engineering" (KRISO). In addition, "ETRI" (Electronics and Telecommunications Research Institute) and San Engineering and Locomotive Co. Ltd. from South Korea as well as the German companies SevenCs GmbH and in-innovative navigation GmbH formed the consortium in this project. The results from KEI.POP were demonstrated to the Elbe and Kiel pilot fraternities, among others, who were enthusiastic about the shore-based and real-time generated radar shadow display on a PPU. They can very well imagine its future use for pilotage at several particularly dangerous areas on the Elbe. KEI.POP was funded and carried out by the Federal Ministry for Economic Affairs and Energy (BMWi) as part of the ZIM funding programme and the EUREKA research initiative. 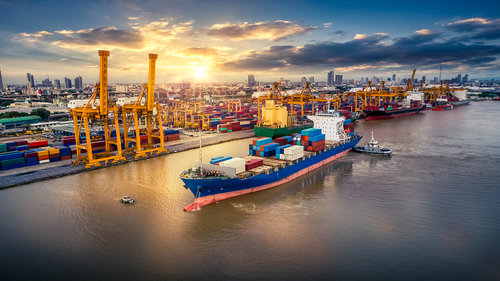 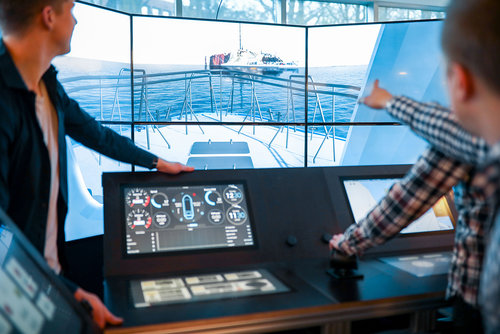 Traffic and bridge simulator of the e-Maritime Integrated Reference Platform (eMIR) at OFFIS, which among other things consists of a physical test field in the German Bight and a virtual mapping in the laboratory. © OFFIS - Institut für Informatik_Bonnie Bartusch